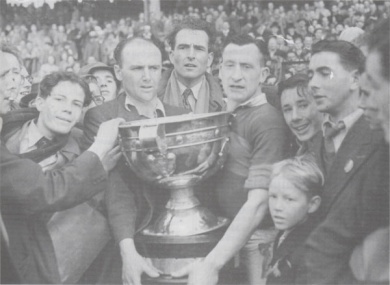 Over the coming weeks and months we will be remembering great Mayo GAA people and events in a history series.

The players and events displayed here are not intended to be a definitive list of every great player and memorable event - to do so would be impossible. What we will do is provide an interesting look at some of those people and events who have helped to shape Mayo GAA.

We will look back at some of the great and good of Gaelic games in Mayo and gladly welcome your input. Anyone with any information they feel may be useful to this section should contact us at pro@mayogaa.com

We start our series with a profile of the last Mayo man to lift Sam Maguire, the great Seán Flanagan. Cormac O'Malley looks back on the life and times of the captain of the Mayo All-Ireland winning football teams of 1950 and 1951. More profiles and memories will follow in the coming weeks.

His accomplishments speak for themselves. Corner back on the team of the Century. Corner back on the Team of the Millennium. Twice All-Ireland winning captain. In the pantheon of Mayo football, Sean Flanagan is the man who all else revere.
Captaining the Green and Red to the 1950 and 1951 All-Ireland victories were Flanagan’s greatest achievements, but he did more than most to bring them to those glory days.
A natural born leader, Flanagan attended the renowned football nursery of St Jarlarth’s College in Tuam where he captained the school’s junior team to their first provincial success. He would follow this up with triumph for the St Jarlath’s senior side in later years, and when he moved on to the next part of his education, success followed.
Unusually for the man who is forever remembered as a left corner back, whilst he was studying in University College Dublin, Flanagan won two Sigerson Cups in 1944 and 1945 playing in the opposite corner. In 1945 Flanagan captained the victorious UCD side, but would suffer heart break the following year when playing full back, they would succumb to University College Cork.
By that stage Flanagan had caught the attention of the Mayo Senior team and it was here he would enjoy his greatest triumphs. However, before Mayo were to bring the Sam Maguire back across the Shannon, many daunting obstacles had to be overcome, and Sean Flanagan was, as ever, leading the line.
Mayo had not won a Connacht Senior title on the field of play since 1937, and by 1947 Flanagan had become disillusioned with the incompetence, as he seen it, of the County Board, and he sent a letter outlining his desire to resign from selection. After much persuasion though he relented and took part in the first league game of the following season in Kerry.
Such was the shambolic nature of the day, that even though the Mayo team had manfully eked out a draw against the Kingdom, Flanagan and some of the fellow senior players were moved to send another letter to the County Board. In the letter the players riled against the inadequacies of the preparation and took it upon themselves to save Mayo football, before as they elegantly and hauntingly put it, ‘football disappears completely in Mayo- unwept, unhonoured and unsung’.
Fifty years before the present day scenarios of inter-county teams revolting, Mayo had done just that. And more importantly they had the skill and talent to back up their determination and drive.
In 1948 Mayo beat Galway after a replay and extra time, to win the Connacht title. They then shocked the country by decimating Kerry in the All-Ireland semi-final in Croke Park, 0-13 to 0-3. Flanagan excelled as the Mayo backs held the Kerry attack to what is still the lowest score ever recorded by the green and gold at the Jones’ Road venue.
The dream was shattered though in September when All Ireland champions Cavan edged a remarkable final 4-5 to 4-4, to retain the trophy they won the previous year in the Polo Grounds, New York. There was much controversy over the premature sounding of the final whistle in the 1948 final but the result stood.
1949 brought more heartache, as once again Mayo escaped Connacht, this time hammering Leitrim in the final, but they fell to three second half goals against eventual winners Meath.
The impressive displays of Sean Flanagan had led many in the county to believe that he was the man to lead the team to glory and in 1950 he was made captain thanks to a change of rule at the County Board Convention. Flanagan duly banned county board officials from the team’s training, allegedly and famously, informing one member of the clergy who was also on the board: ‘get out and I’ll see you when I have the Sam Maguire’.
Flanagan kept to his word, and thanks to a strict and forward thinking collective training programme, the team delivered the All-Ireland title for the first time since 1936.
The year started with controversy as the new law to abolish the open-palm hand pass, caused immense confusion for some teams, but Mayo were a team on a mission and with their direct approach, right from defence they blazed a trail through Connacht, beating Roscommon 1-7 to 0-4 in the final, and trouncing Armagh in the All-Ireland semi-final 3-9 to 0-6.
In the final they would face Louth, who had knocked out Kerry in the other semi-final. Nothing though would deny Flanagan and his charges this time, and Mayo triumphed on a score line of 2-5 to 1-6.
To win it once is great, but to retain it is to be great - in 1951 Mayo retained their crowns, and Flanagan remains one of only seven men to to captain a side to successive triumphs, as Mayo demolished Galway and then in the All-Ireland final out-scored Meath 2-8 to 0-9.
In retirement Flanagan would go on to manage Mayo to an All-Ireland Junior title in 1957, while in 1951 he was elected to Dial Emirian, serving as Minister for Health, and Minister for Lands. In 1979 he was elected to the European Parliament. His son Dermot would follow in his footsteps in the number four jersey and win two All-Stars, in 1985 and ‘89.
Born in Aghamore in 1922, Seán Flanagan died on February 5, 1993.