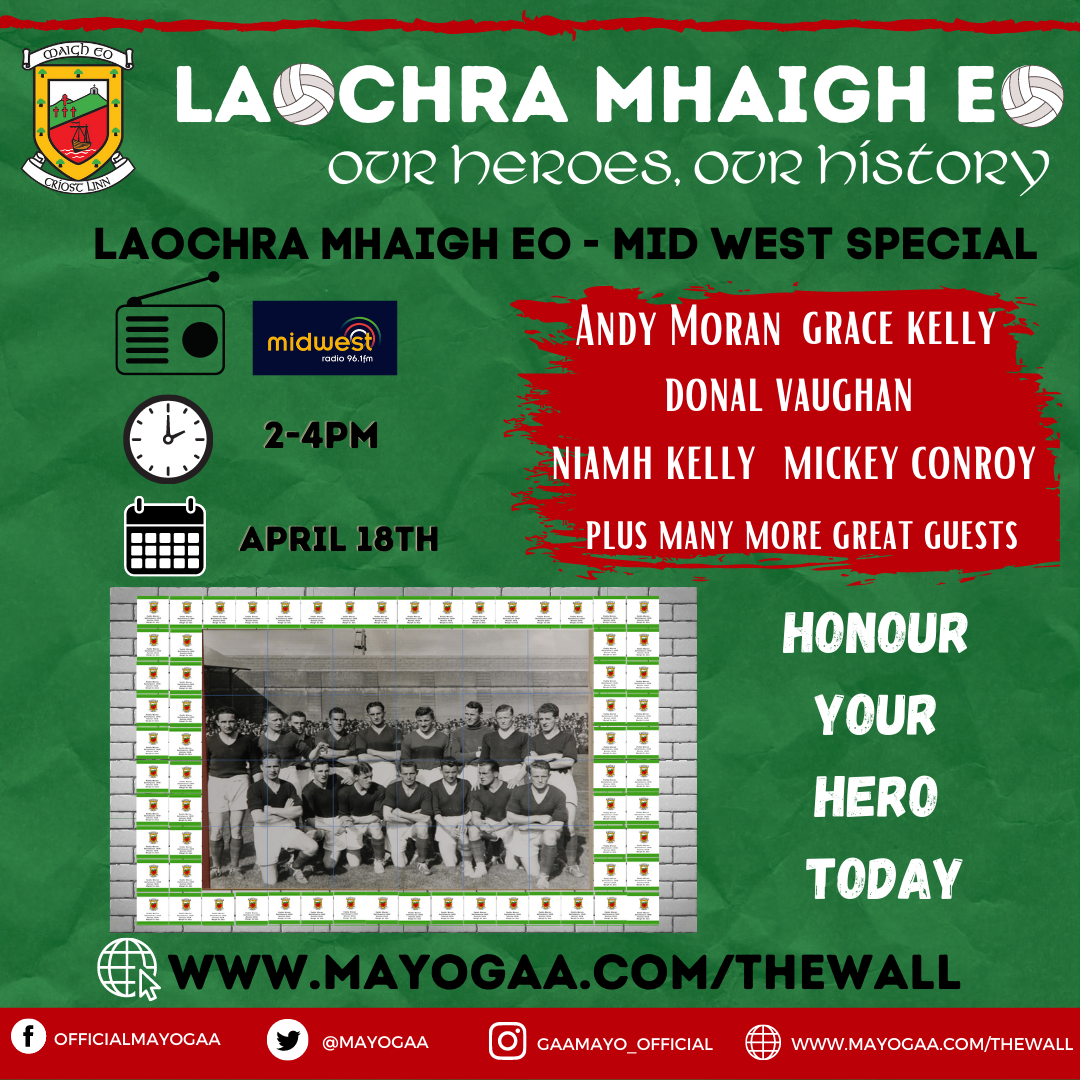 Did Mayo legend and Moygownagh native Anthony Finnerty break the crossbar in MacHale Park with a pile driver of a shot during the 1992 Connacht Senior Football Final against Roscommon?  Were you in Croke Park in 2006 when Ciaran McDonald landed a magical and dramatic late winner vs. Dublin from out under the Hogan Stand?  What about the famous Gaelic Grounds in Limerick in 2014.  Can you recall the heat, humidity and the heartbreak as Kerry pounced late to win 3-16 to 3-13 in the All-Ireland Football Semi-Final Replay?

These stories and many more are likely to feature in a special Mayo GAA broadcast on Mid West Radio this Sunday, April 18th from 2-4pm.  Entitled ‘Laochra Mhaigh Eo – Our Heroes, Our History, the two hour special is a celebration and commemoration of all the wonderful men and women that have supported and promoted the GAA in the county down the years.

The radio show this Sunday is about looking back with pride but also looking to the future with great expectations and hope. There are so many magical Mayo GAA stories to retell.  From grassroots to the green carpet of Croke Park Mayo GAA players, supporters and officials have always given their best.  This special radio show is all about shining a spotlight on those GAA heroes, many of whom are no longer with us.

2017 Footballer of the year Andy Moran, Donal Vaughan and Mickey Conroy are just three of the former greats that will be reminiscing and recalling memorable Mayo GAA moments.  They will also reflect on their own GAA journey, highlighting the club volunteers and coaches that inspired and motivated them to reach for the stars.  Mayo sister act and Aussie Rules stars Grace and Niamh Kelly will also join the discussion from down under as they reflect on their own Mayo GAA sporting heroes and their new life playing with the West Coast Eagles in the Australian Football League Women’s Championship.

We have the best and most loyal supporters in the country and we are looking forward to hearing their stories also this Sunday.  From Belmullet to Boston and from Achill to Australia Mayo GAA supporters are special for their allegiance and support to their native county.

The broadcast this Sunday is part of a year long programme of events to raise funds for the resurfacing of MacHale Park.  A new ‘Laochra Mhaigh Eo’ ceramic wall at MacHale Park features the 1936, 1950 and 1951 All-Ireland winning Mayo teams.  The ceramic wall is a lasting legacy to the wonderful players, supporters, volunteers and club members of the county.  Information on how to support the ‘Laochra Mhaigh Eo’ initiative can be found at the website www.mayogaa.com/thewall