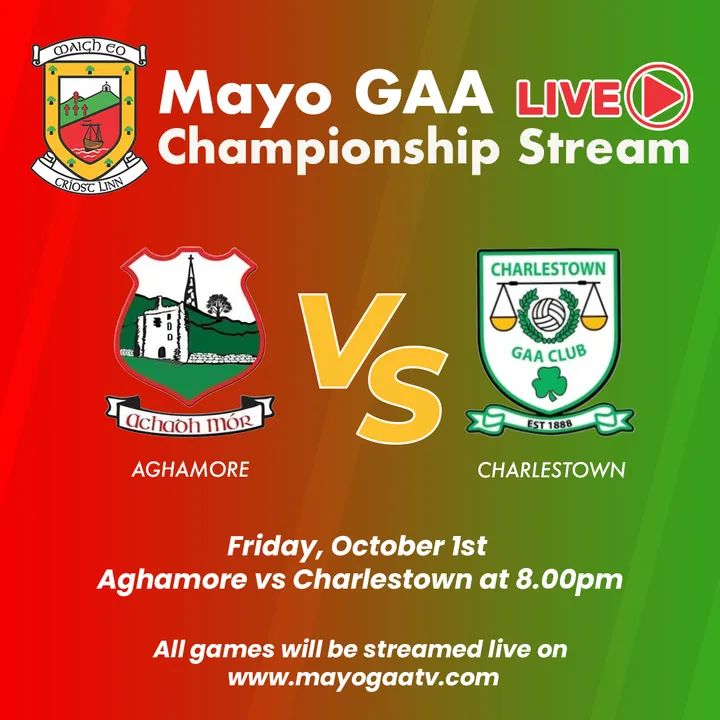 This coming weekend sees the first Friday night lights game in the Mayo senior club championship as Charlestown travel to local rivals Aghamore. While Friday nights have become a regular fixture in other sports, the GAA has been generally slow to adopt it across the board. However, recently we have seen other counties introduce the concept and this weekend sees Mayo follow suit.

Charlestown manager Martin Mulvaney is a huge supporter of the Friday night games, arguing that it gives players freedom to enjoy their weekend after a big game.

“I think Friday night games are a great idea, particularly for club players. They play weekend after weekend and they don't have a social life. The Friday night games work, especially this weekend with the gap week next week. So if the lads want to do their own thing after the game. I think it's a mighty idea,” Mulvaney told Mayo GAA.

The match itself sees two neighbouring clubs take on each other in what could essentially decide second place in the group. In many ways last Sunday was a rollercoaster for Charlestown at home to Belmullet, in a game where they found themselves 2.3 to 0.3 down at the first water break. Despite the six point deficit, Sarsfields fought back to eventually lead by one before surrendering that lead near the end. However, to limit their opponents to just three frees after that water break is something Mulvaney was very pleased about.

“In the end I suppose a draw was a fair result. We had a terrible first quarter, compared to Belmullet. Their intensity levels in the first 15/16 mins, we just weren't up to it. After that, I was pretty happy with our performance because we ended up going a point up at the end and probably could've seen it out but we didn't. But look, a point's a point,” Mulvaney said.

“From the 17th minute onwards they didn't get a point from play. Again, you can look at that in two ways - we should have maybe seen it out but to win 0.9 to 0.3 from there on was very impressive,” he continued.

To draw a game where you outscore your opponents 12 scores to eight (0.12 to 2.6) but fail to get the goals is always frustrating, no more so than when both goals could have been avoided.

“They did (get the goals) and looking back on the game it was a combination of factors. The lead up to both goals were very similar situations. We have done a bit of homework on them

this week and hopefully they don't happen again because goals at this time of year are huge scores,” Mulvaney added.

Regarding Friday night, Mulvaney is excited at the prospect of taking on their local rivals in Aghamore under the Friday night lights.

“We played Aghamore a good few times this year. We're neighbours, we know a lot about each other. It was always going to come down to this game as well. It's under lights, the atmosphere is going to be electric. Just to see supporters back again and it was a great crowd there last weekend. I'm sure Aghamore will be absolutely rocking on Friday night under lights,” Mulvaney said.

With the quick turnaround of five days (Sunday-Friday), the Charlestown manager still managed to watch Knockmore’s victory over Aghamore in full, where he believes Friday’s opponents didn’t do themselves justice.

“Two of the management team and I watched it. I suppose like ourselves they didn't get off to a great start. They didn't show their true credentials on the day in my opinion. They're a lot better than what they showed. They improved a lot in the second half but the game was effectively over at half-time,” Mulvaney said.

With the five day turnaround, Mulvaney batted that off as an excuse, saying the buzz of championship should get his players up and ready for the battle on Friday night.

“You'd always want another day or two to work on a few things. It's tight with the organisational side of things, getting video work done and stuff like that. But, with a five day turnaround - after drawing the first championship game - the players should be buzzing to get stuck in again,” he added.