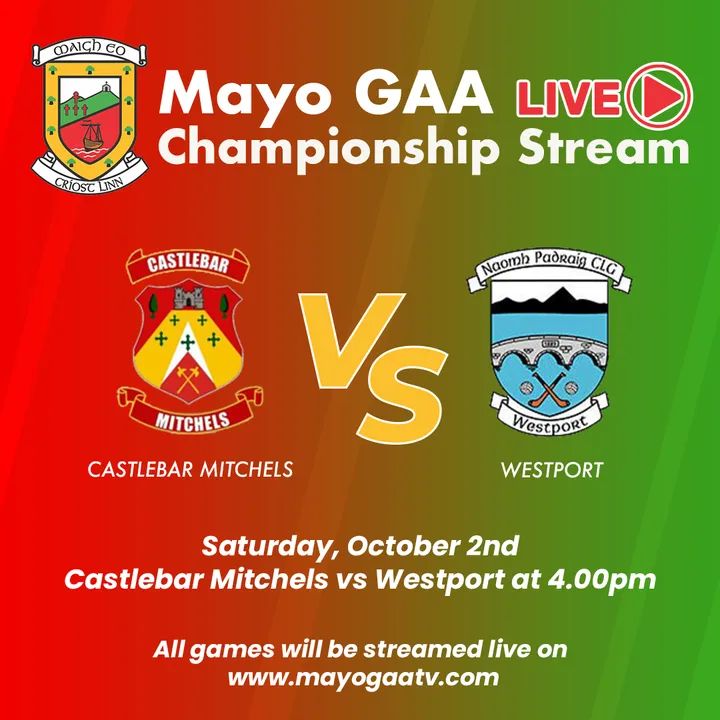 Castlebar Mitchels chairman Paddy Mahon is overseeing a club project to promote as many younger players to the senior squad as possible. The first test of that project came last weekend away to 2020 Mayo Intermediate champions, as well as local rivals, Balla.

Both sides started slow, with Castlebar just 0.2 to 0.1 up at the first water break. However, a strong second quarter set Mitchels up for a 1.14 to 1.9 win at the full-time whistle.

“It was an eagerly awaited match as well as a local derby. With Balla being up in the senior championship, it was a big opportunity for them to show how good they are. So I think both teams were a little bit respectful of each other the first while and tried to figure each other out. It was a tough game. Balla put up a good performance,” Mahon said.

Mahon went into detail on Castlebar Mitchels’ ambitions to bring as many young players through their underage structures, while also finding that balance between youth and experience in the senior team.

“I think from our point of view, we had three of our under-19s starting on our senior team. We're working very hard to integrate the younger players with the more experienced ones. Last year we would have started two under-19s but this year against Balla we started three. Getting the balance right between the younger and older players is a big part of what Castlebar Mitchels are about this year.”

“Integrating the youth with the experienced players, we have a panel of around 32 in our senior team at the moment and I'd say they're broken down half and half,” Mahon continued. “The more experienced players who have been around a long time and indeed, have won county medals for Castlebar. Plus, the number of young people that are coming through the club now, through the underage structures in the last while.

‘Ag obair le chéile’ means working together and this is a motto that the club lives by, while also allowing it to grow the Irish language by getting young players to use the cúpla focal when playing GAA.

“We're trying to promote the Irish language in the club as well, ‘ag obair le chéile’, amongst the newer and more experienced guys. It’s a challenge (to find balance in the squad) but it's something that the club and the team is up for and we saw some of that against Balla last week and we hope to see it continue against Westport on Saturday.”

With this approach, the biggest challenge for Castlebar is the need to get full buy-in from everyone in the club. Constant communication and support from senior management allows the club to put the underage structures in place, safe in the knowledge that if a young player is good enough for the senior team, then he will be given his chance.

“Listen we're lucky compared to other clubs that we have a good amount of younger players coming through the ranks and player retention from around 17/18 onwards is huge and we recognise that. Indeed, so do our managers at senior and intermediate. So it's a very important thing for us to retain the players and it gives them every opportunity to develop into full senior players. It's a challenge but with the club, the players and the managers working together, hopefully this leads to good performances in the championship.”

Saturday’s game against Westport - which is live on Mayo GAA TV - sees Castlebar as slight underdogs. However, Mahon believes that Mitchels have the right blend of youth and experience to cause their opponents problems.

“Any time Castlebar play Westport, it's always going to be a big match. Westport are a very talented team. They had a great performance at the weekend so it's going to be a good challenge at our home ground. Having said that, we have a good mix of experience and youth so I expect us to give Westport a very stiff challenge on Saturday,” Mahon said.

Regarding the return of proper crowds to the championship this year, the Castlebar chairman is delighted to be hosting a big championship game and paid tribute to the county board for their organisation and promotion of this year’s championship.

“The atmosphere at Balla last Saturday was excellent so hopefully it'll be the same at Castlebar. Now I don't think the weather may be as good as it was but there's still a lot of interest and plenty of tickets sold as far as I can gather. You have to pay credit to Mayo GAA TV for covering it but also to the county board for the way that they're organising the championship this year. They're making it as easy as possible for supporters to go and see as many games as possible as they're spread out over the weekend. There's a lot of people supporting their local clubs but there's also a lot of people who are very interested in club football in Co. Mayo so it's great to see that level of interest. Everybody wants to see their club do well but it's also great to see good club level football across the county,” Mahon said.