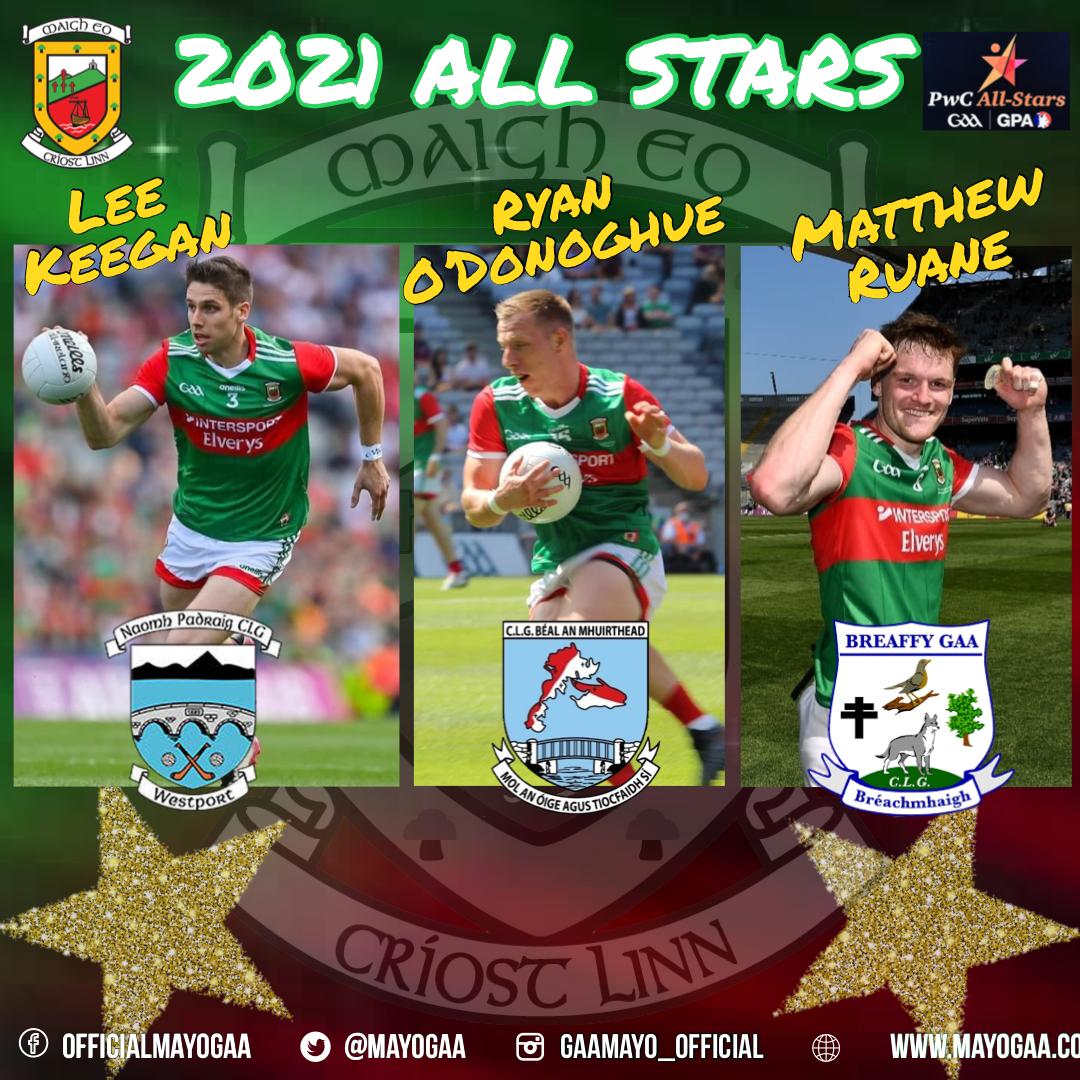 Lee Keegan’s iconic status in Mayo football was further enhanced this evening with a fifth career All-Star, making him the most decorated player from the county in the 50 years of the awards scheme.

It was also a memorable evening for Australia-bound Oisin Mullin, who was named the PwC/GPA Young Player of the Year for the second time in a row.

Meanwhile, Matthew Ruane and Ryan O'Donoghue won All-Stars for the first time, making it a successful awards event for the All-Ireland runners-up.

Tyrone – Mayo's conquerors in September's decider in Croke Park – finished with eight All-Stars and the PwC/GPA Player of the Year Award, which went to Kieran McGeary.

Like Mayo, Munster champions Kerry won three All-Stars, while Ciarán Kilkenny was Dublin’s sole PwC All-Star in 2021 but, like Keegan, becomes a five-time All-Star winner in the process.

Congratulating the winners, Uachtarán CLG Larry McCarthy said: “For the second year running our games at club and county level have been a source of joy for people in the midst of the pandemic, and I want to thank them most sincerely for their dedication and their endeavours.

“The PwC All-Stars offer us a chance to reflect on the multitude of great games that lit up our summer and this football selection is a great representation of that.

“It is a huge honour for those selected and one shared by your families and clubs who have helped shape you.

“Over the last 50 years the All-Stars has become synonymous with excellence in Gaelic games, and I thank our partners in PwC for their assistance in promoting these iconic awards.”

Mayo man Tom Parsons, CEO of the GPA, added: “First of all a word of thanks to every player who gave us another exceptional season in 2021. The excitement, colour and drama you brought us in what was at times a very difficult year for the country is hugely appreciated.

“To all the nominees, a massive well done. To the 15 winners, congratulations. Much like subs pushing for a starting place, there were many nominees who could slip into the final selection without weakening it, which makes the achievement of the fifteen winners all the more special. You were the best of the best.”

Like Oisin Mullin, Kilkenny's Eoin Cody was named the PwC/GPA Young Player of the Year in hurling for the second year running, and Parsons had a special word for both. “That is a superb achievement and testament to your consistency of performance,” he said.

“An All-Star award is due recognition of an outstanding season, something these players, their families and clubs are all no doubt hugely proud of. Each of the winners is thoroughly deserving of this honour, an acknowledgement of both their individual displays and their ability to play as part of a team,” he stated.

The winners were announced live as part of a special programme on RTÉ television that replaced the traditional awards ceremony banquet, which was cancelled due to the pandemic.

The selections were were chosen by a panel of Gaelic games correspondents drawn from across print, radio, television and digital media. It was chaired by Uachtarán CLG Larry McCarthy in what is the 50th year of the awards, which were first held in 1971.

The PwC GAA/GPA Players of the Year were voted on by the players themselves. Oisín Mullin’s fellow nominees were Matthew Tierney of Galway and Tyrone’s Darragh Canavan.