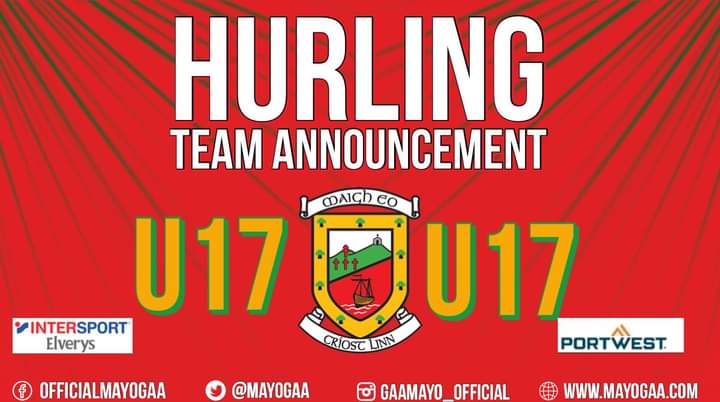 Mayo GAA U17 hurling manager Brian Finn has named the same team and panel that defeated Kildare last time out for their crucial Electric Ireland U17 Celtic Challenge All-Ireland Hurling Final against Sligo this Saturday, June 4th at 12 noon in Markievicz Park in Sligo.

Tooreen's Jake Glavey retains his place at wing-back after impressing against Kildare in the semi-final with the same six backs starting for consecutive games.  Joint-captain Stephen Reilly is rock solid in goals with Westport’s Tom Lambert and Conor Ketterick flanking Rory Deane at full-back.  Lambert and Ketterick haven’t put a foot wrong all year.  Deane, son of Mayo minor football manager Sean Deane, is always brave and strong on the edge of the square.  Glavey, Ryan Finn and Sean Keadin are a skilful and stylish attacking half-back line with midfielders Matthew Connor and Sean McGhee providing cover when they attack from the back.  Joint captain McGhee has been a revelation in the middle this season and his powerful runs and accuracy have propelled Mayo to this stage of the competition.

Upfront centre-forward Colm Enright and full-forward Aidan Cunningham are the chief score getters.  The Castlebar Mitchels duo are deadly accurate and have contributed handsomely to Mayo’s victories to date.  Wing-forwards Conor Donaldson and Colin Duffy were outstanding in the 2-08 to 0-13 win over Kildare in the semi-final.  Duffy landed 1-02 from play that day with Donaldson also finding the net for Mayo.  Westport’s Cathal Guilfoyle and Tooreen’s Sean Lynskey complete a formidable full-forward line with Cunningham.

The U17 Celtic Challenge Hurling Championship was established in 2016 and is the only competition in hurling that has teams from all 32 counties participating.  This is the first time ever that a Mayo hurling team has reached the All-Ireland Final.  The victorious team on Saturday will be presented with the Michael Feery Cup.  The Cup is dedicated to the memory of Bloody Sunday victim, 40-year-old Dubliner Michael Feery who died after he became impaled on a spike while trying to flee from the shooting in Croke Park in November 1920.  Mayo GAA will have live updates from this game across all its media channels this Saturday. Referee on the day is John Cahill from Ballygar, Co. Galway.