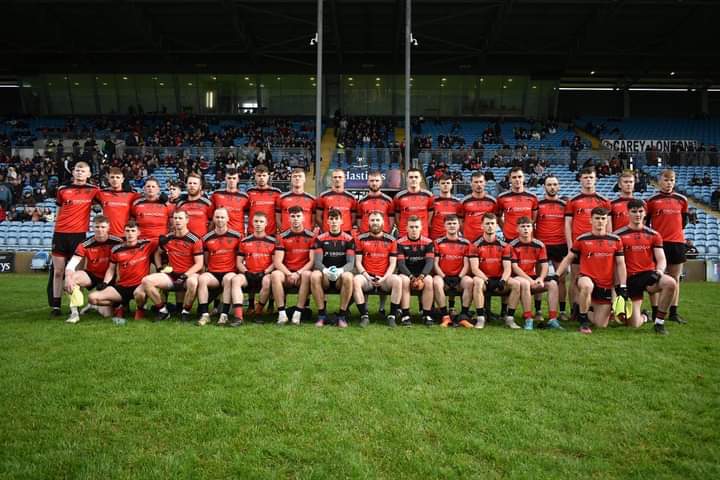 The second of Saturday’s finals saw last year beaten Mayo IFC finalists face off against last year’s JFC All Ireland Champions Kilmeena. With both teams having plenty of experience in finals the game unfolded in a defensive tactical manner. That was until the weather conditions began to deteriorate and the game came to life for the final quarter of play.

James Lyons opened the contest after 30 seconds with a point off his right foot from play for Ballyhaunis. Adrian Phillips quickly doubled his sides lead as he made the trip from his goal to slot over a 45’. Jack Carney replied for Kilmeena with a fine solo score, running through the heart of the Ballyhaunis defence and dropping the ball over the bar.

As Ballyhaunis began to misfire in front of the posts, shooting numerous wides, Kilmeena fired a quick triple of singles to take the lead. Darragh Keaveney converted a free kick, Joey Smyth added a point from a mark and Keaveney then scored his first point from play.

After a thirteen-minute scoreless period, Phillips made the trip up from his goal again to convert a thirteen-yard free kick for the team in red and black. Morgan Lyons levelled the contest with a super score, running down the right wing before cutting back onto his right foot to curl the ball between the posts. Ballyhaunis were beginning to get to grips with Kilmeena’s long ball threat and this solid defensive period allowed full back Jack Coyne to get forward to fire Ballyhaunis ahead.

Kilmeena’s early perfect record in front of the posts began to slip away as they added 4 wides during the second quarter of play, but this trend ended as the first half entered injury time. Carney’s forcing of an interception in the Ballyhaunis backline allowed for his second point on the day and Keaveney showed great skill to dummy his marker and finish off his right foot with the last kick of the half to leave Kilmeena ahead by the most minimum margins of one point at halftime.

No sooner than had the second half started was the contest level again as Lyons raised his second white flag. Connor Freely quickly ventured up the pitch from corner back to put Ballyhaunis ahead once again with a point from play.

Six minutes had passed since the resumption of play when Kilmeena hit the back of the Ballyhaunis net. Keith Joyce and Sean Ryder combined to provide a goal chance to Joey Smyth who finished the ball into the back of Phillip’s net. However, the goal was disallowed as the ball had been handled on the ground in the goal’s build up.

Keaveney did level the contest for the fifth time with his second converted free kick just moments before Kilmeena had another chance to raise a green flag. Ryder again playing play maker squared the ball to Jack Carney, but the midfielder’s punched effort was superbly blocked on the line by Man of the Match Jack Coyne.

Morgan Lyons fired Ballyhaunis ahead with 42 minutes on the clock, and they never let their lead slip again, after the full forward fired over a point off the outside of his left boot from long range. Jason Coyne quickly doubled his side’s advantage with a converted free kick while Smyth replied for Kilmeena, slotting the ball over the bar after patient build up play.

Ballyhaunis hit for an unanswered 4 points during the final ten minutes of ordinary time courtesy of Morgan Lyons, Coyne from play, Kevin Byrne and Coyne from a free kick. Five points separated the teams as the three added minutes of injury time began but Keaveney’s two converted free kicks still left Ballyhaunis three points to the good as the final whistle sounded.

Man of the Match: Jack Coyne